The  Ford Blitz 1942 truck was donated by Adrian Daniel. Adrian is a local solicitor and one of the early members of the Hervey Bay Historical Society. He actually donated two and we rebuilt one from the combined parts of both vehicles.
Our volunteers are very skilled in vehicle restoration, being mainly retired mechanics, engineers and panel beater/spray painters. The Ford Blitz along with the Chevrolet, especially the 4wd models, were very popular on Fraser Island after the second world war when they became readily available to private owners.
They were ideal vehicles to transport people and materials around the island, this being the largest sand island in the world.
We use the vehicle regularly at outside events, the main one being the Anzac Day Parade in Hervey Bay.
In 2015, celebrating 100 years since the Gallipoli landings, the Blitz had a lead role, being the second vehicle in the parade.
It takes a lot of skill to control as it is not an easy vehicle to drive.
It has a crash gearbox and a non standard placement of the brake and accelerator pedals compared to modern vehicles. They are in opposite places, with the brake pedal being in the middle between the clutch and brake. 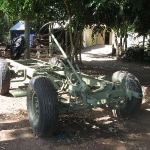 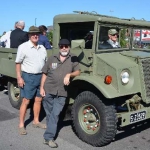 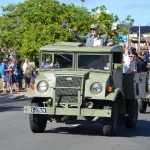