The  Ford V8 1934 Tip Truck was lying rusting in the backyard of one of our members, Lez Geissler. He decided to donate it to us for restoration on the basis that he could be involved. We jumped at the chance as he is a qualified panel beater and spray painter. The vehicle was totally stripped and many of the parts were sandblasted and powder coated by a local firm (Bay Powder Coating). A new cab was constructed as well as a new tray back as the original timbers were almost rotten. The original motor was in very poor condition so we hunted around for a replacement. We eventually built a motor from several we were donated.Two years after donating it, Lez came with us to Main Roads to register our first restored vehicle. Typical of vehicles of that era, it has a crash gearbox and mechanical brakes. Some anticipation is needed when stopping as it only has mechanical brakes which require very heavy pressure to slow the vehicle down. The foot pedals on this truck are conventional, unlike the Model T or the Blitz.
Some skill is needed to synchronise the speeds of the gearbox with the output gears so that too much crashing of the gears is prevented, especially when changing down to a lower gear. A good driver takes pride in making all his gear changes quietly. 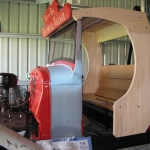 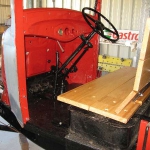 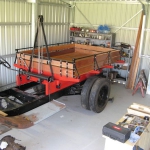 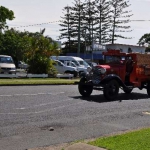 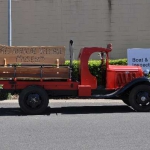 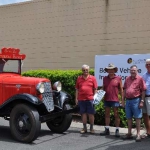